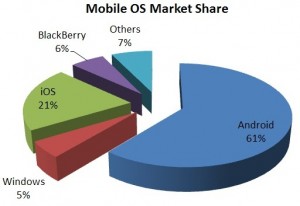 While this site has focused on developing apps for the iPhone, iOS is obviously just one of a few different mobile platforms that are available to develop on. In fact, it is not even the biggest one, as the chart on the left shows (image source). So should you be developing just on iOS? Which other platforms should you also develop for?

If your goal is to maximize your user audience, then of course your goal should be to develop for all platforms. However that requires significant development costs, since most developers are only proficient in one (maybe two) platforms. If you’re just getting started, then start with one platform. If you find yourself succeeding, then you can use the profits you earn to expand to other platforms later.

So which platform should you begin with? 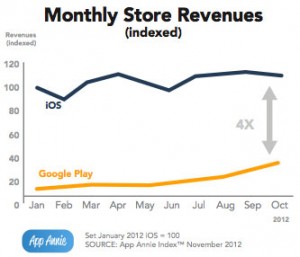 Right now, Android provides the biggest platform in terms of users. However the percentage of users who pay for apps is a lot lower for Android users than it is for iOS users.

So even though Android has significantly higher marketshare than iOS, the app sales generated on iOS are still a lot more, than what is generated by Android.

Considering that Android and iOS control more than 80% of the mobile market, is it even worth considering one of the smaller platforms like Windows Phone 8, or Blackberry 10?

Surprisingly there are indeed a few advantages for developing for these other platforms:

Competition is MUCH lower: Windows Phone 8 and Blackberry 10 provide a unique advantage in that although they have much smaller user bases than either Android or iOS, they also have much smaller app stores too. This means you have a lot fewer apps to compete with. Therefore it’s possible that you could make more 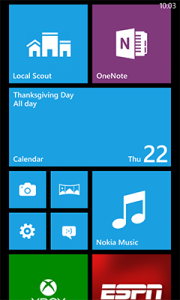 money from these smaller stores, just because more users will find you there, than they would in the crowded market places of Android and iOS.

Development costs COULD be cheaper. In many cases, Microsoft and RIM have been known to woo developers with contests and promotions, where they can provide you with tools, marketing opportunities or even contribute towards development costs. Certainly there’s no harm in researching what promotions are going on at the moment, and whether it is worth developing for, or porting one of your existing apps over to these other platforms.

What Platform do You use?

At the end of the day, if you are just starting out and want to keep costs low, I would suggest starting with the mobile platform that you are already using and already familiar with. This way you’ll save money on purchasing new devices.

You will be the one testing the app, so it makes sense to choose a platform that you’re familiar with, that you already own devices for.